Scripting support has recently been introduced in Trace Compass through an incubator feature. This feature uses the Eclipse EASE Framework for the various scripting engines and integration with the application.

It gives users the flexibility to do their own analyses / views from the traces data. Or to run scripted workflows when opening traces so interesting areas of the trace are automatically highlighted. This github repo contains a few example and utility scripts that can be run with Trace Compass.

One question the users asked is which engine to use? What’s the performance impact of each. Our first answer was that of course there would be a performance hit by running a script, but it should not be that high and engines should be quite similar to the language they provide. But experimental results have shown quite differently. So we have run a set of benchmarks for the various scripting engines. They are summarized here.

TLDR: For javascript, performances are similar for all engines, though rhino does not work for all scripts as it does not support very well calling java methods with multiple signature. For python, use jython if you make a lot of calls to java and don’t need external python libraries, py4j has a heavy performance cost when calling java methods or using java objects.

The main scripting languages used by Trace Compass users are javascript and python. For each of those, EASE provides 2 engines: nashorn and rhino for javascript and jython and py4j for python.

Both javascript engines run the javascript code on the Java Virtual Machine. nashorn (rhino in german) is a new implementation of the aging and under-performant rhino engine. Both should run any javascript code, though nashorn better supports the latest features.

For python though, both engines are very different:

jython is a Java implementation of the python language. A script written in python and run in jython will thus be run in Java. A jython script can import any java class or package like it would a python library. For instance, one could just add an import statement from org.eclipse.tracecompass.tmf.core.trace import TraceManager and then call any method of TraceManager directly in the code. On the flip side, it cannot import any external python library.

py4j runs the script in a python interpreter and uses a gateway to communicate with a Java Virtual Machine, through a network socket. The script thus has access to all the python libraries available to the interpreter, as well as to the Java classes and objects. But the socket communication between java and python brings an additional overhead that we will measure with the benchmarks.

Additionally, because of the differences between jython and py4j, scripts may need to be written differently for both engines, like the callbacks from java to script for example, as we will highlight in the benchmark scripts descriptions. Also py4j needs to explicitly detach java objects from the script engine to avoid filling the memory.

I’ll take the opportunity here to show how to implement callback methods for the various script engines. The signature of the Java method receiving the callback is as follows:

The return value of the function is a Number instead of a specific type as some scripting languages may have values of type double or float or long. The Number reduce the hassle on the callback.

For python, jython and py4j have different implementations for the callback. jython has direct access to the classes so can easily extend the Function class

py4j, on the other hand, must do it differently. This approach will unfortunately not work with jython.

The results are shown in the graph below, notice the logarithmic scale. 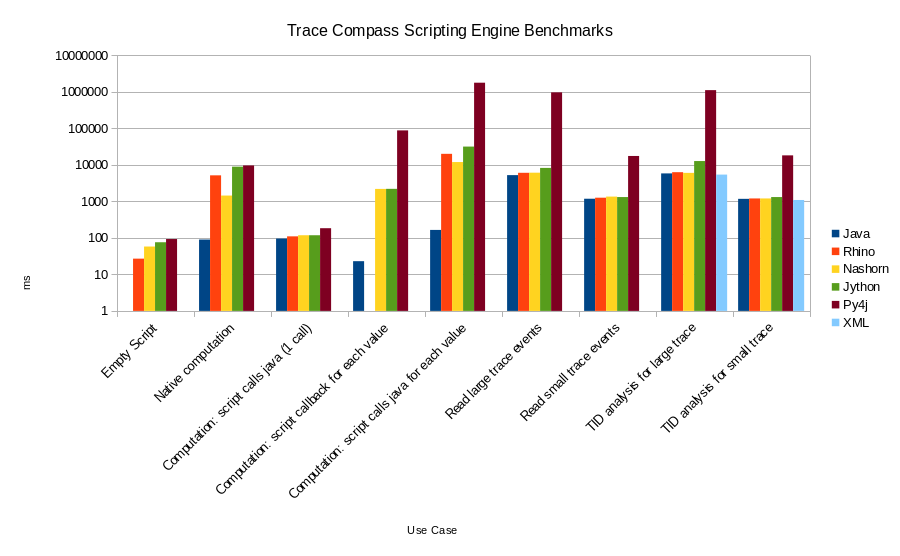 For Trace Compass users, the important take-away is that except for py4j, scripting engines have similar performances and the overhead compared with pure java for similar workload is negligible.

From the Scripting API

py4j is a special case though: its communication mechanism with Java has such a high overhead that its usage is prohibitive for everything but small traces. But py4j’s main advantage is the possibility to leverage all the external python libraries available. A use case of our users is to do machine learning with trace data and there exists a lot of python libraries out there to do so. So how could we take advantage of that without having to wait forever?

One way to do so is, knowing the cost of passing Java objects to/from script, to reduce the number of passages at the source. The API should allow to minimize the object passing. For instance, when reading a large kernel trace, not all events are required to run our analysis. If we can reduce the number of events passed between the script and the Java code, then the performances should be improved.

In our benchmarks running the TID analysis, the only event we are interested in is the sched_switch, so we add this event to the event iterator before starting to iterate and only those events will be returned.

The following chart shows the performance improvement with this approach. Even though performance is improved by an order of magnitude, it is still far off the jython performances without event filtering.

Another approach would be to mix python scripting engines when external libraries are requested. Those libraries’ API often requires a specific data structure to run on, so a jython script can prepare this data structure using the trace data and then call a py4j script to act upon this data. For this, EASE’s Scripting module can be handy, with its fork method and using shared objects to pass data to the other script

The following script is a python script that can be run with the jython engine that prepares a dictionary object and passes it as a json string to another python script run with py4j. It then forks a new script execution with the py4j engine and waits for the result.

The following py4j script receives the name of a shared object in argument and gets the corresponding string, loads it as a dictionary, does something with it and returns.

Note that the dictionary object was dumped as a json string before passing it as a shared object. If it was passed directly, Java would have converted it to a java HashMap and getting each element would require calls to java, which is what we want to avoid here.

How to change the scripting engine?

We’ve been discussing how different python engines behave differently. But how do we change the engine running the script? The following screenshot shows how to do so: 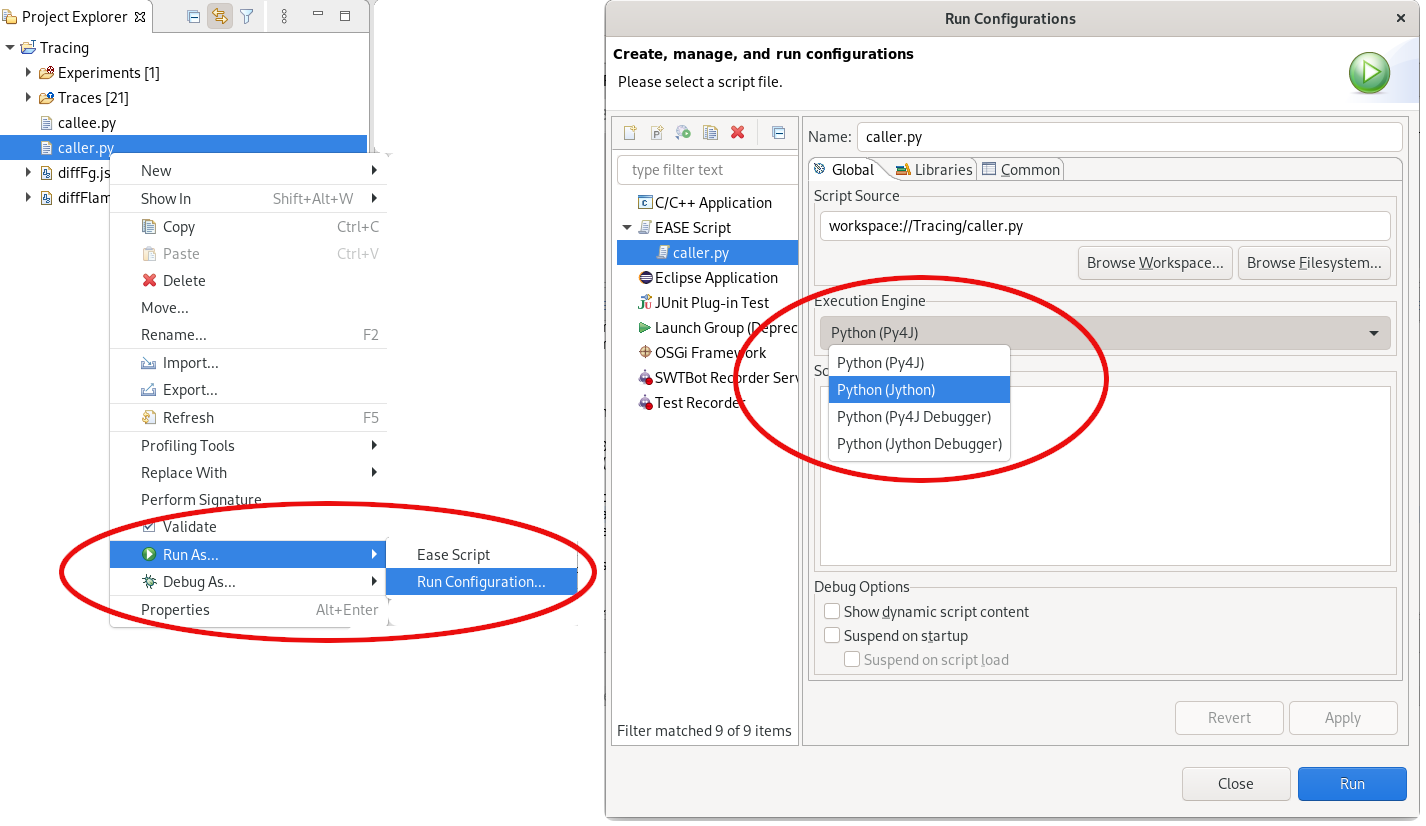 The benchmarks executed in this script are now, or will shortly be, part of the Trace Compass code base, in the org.eclipse.tracecompass.incubator.scripting.ui.tests plugin, in the perf directory. The scripts themselves are in the scripts/perf directory of the plugin.

See also this git repo for example scripts and links to all available documentation.